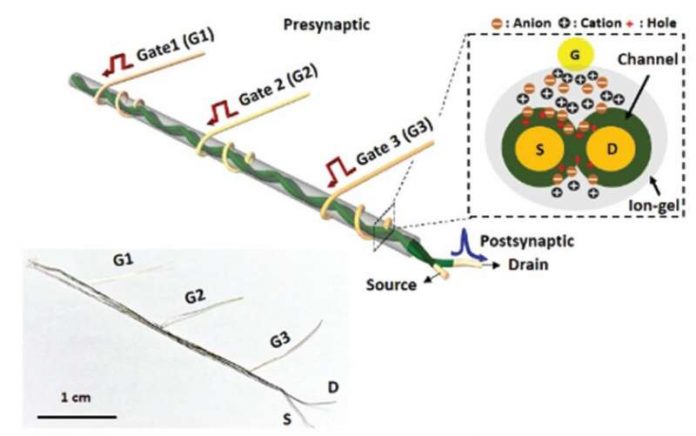 Researchers develop artificial neural fibers that mimic the structure and functionality of the human brain.

Artificial Intelligence-led technologies have the ability to process large amounts of data, and these technologies have increased the amount of data available for processing by computers. However, existing computing methods process data sequentially, and therefore require more time and power for processing massive quantities of information. Researchers across the globe are trying to develop a computing network that can mimic the structure and mechanisms of the human brain.

Each neuron in a human brain is capable of doing complicated nonlinear calculations. Moreover, the energy efficiency of the brain is extraordinary, and no processor on earth comes close to brain’ energy efficiency.

A research team from Korea Institute of Science and Technology (KIST), led by Dr. Jung ah Lim and Dr. Hyunsu Ju of the Center for Opto-electronic Materials and Devices, has successfully developed organic neurofiber transistors with an architecture and functions similar to the neurons in the human brain. The artificial neurofiber developed by the KIST researchers can mimic the behaviors of both neurons and synapses. By connecting the transistors in arrays, a structure similar to neural networks can be formed.

The researchers came up with memory transistors that remember the strengths of the applied electrical signals, similar to synapses, and transmit them via redox reactions between the semiconductor channels and ions within the insulators upon receiving the electrical stimuli from the neurofiber transistors. The artificial neural fibers moreover mimic the signal summation functionality of neurons.

For validation of this concept, the researchers created an artificial neural network system comprising 100 synapses using the artificial neurofibers. They verified stability by training speech recognition algorithms to the device. They found that the device achieves an accuracy of 88.9% after training with speech data.

The research appeared in the journal Advanced Materials.

The Latest News on Development Of Artificial Neurofiber Transistors

The future of ‘Minecraft’ includes swamps, scary monsters and a Game Pass bundle